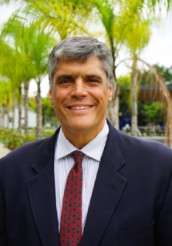 Ed.D. in Educational Administration from Temple University, an M.B.A. from Dowling College, and a B.A. from Wheaton College.

From 1995-1997 he served as assistant head of school, director of development and middle school principal at the Cornerstone Christian Academy in Philadelphia. From 1989-1995 Dr. Cohen served as associate director of admissions, teacher of European and African-American history, dormitory head, and football coach at the prestigious Stony Brook School in Stony Brook, NY, the school from which he graduated before accepting a football scholarship to attend Wheaton College. Following graduation from Wheaton College, Dr. Cohen and his new wife, Anne, remained in Chicago where they served as senior house parents to abused boys, aged 6 to 18 at the Lydia Children's Home. From this experience, the Lord laid adoption on the Cohen's hearts and five of their seven children are adopted.

Dr. Cohen has served on the board of directors of the Association of Christian Schools International (ACSI), has twice addressed the White House Forum on Urban Faith-Based Schools, has hosted five delegations of US State Legislators through the Milton Freeman Foundation and has worked with members of the US Congress to establish the first National Prayer Breakfast in the Dominican Republic.

When Dr. Cohen first assumed its leadership, Santiago Christian School (SCS) focused primarily on providing a quality American education for children of North American missionaries. Never losing focus on the original mission, SCS has emerged as the "school of choice" for the highest business, government, & industrial leaders, as well as professional athletes in the Dominican Republic. These parents prize the educational quality of the school and the opportunity for their children to become fluent in English. Among Dr. Cohen's numerous accomplishments at Santiago Christian School: adopting new standards and revising curriculum at all levels to be on par with top level US schools, including enriching the reading and social studies programs, enhancing the STEM program with robotics, implementation of the Full Option Science System (FOSS) science curriculum in grades K-4 and aligning the curriculum to the Next Generation Science Standards (NGSS); adding advanced courses in high school honors, AP and dual enrollment with US universities; developing a number of spiritual life programs that included multiple Bible studies for the school community; developing a student leadership program that resulted in the creation of the Santiago Institute for Leadership and Justice; implementing a spiritual life campaign to engage students and parents in raising funds or donating items for communities in need in the local area or abroad; enhancing the fine arts program, which involved the creation of a Fine Arts Society for students to promote engagement with local arts events, and the establishment of a Fine Arts Council, composed of parents, students, and teachers who promote the arts at the school and in the community. The athletic program has become a strong competitor, winning a number of championships and there has been a remarkable increase in parent attendance and engagement in the sports program.

Under Dr. Cohen's leadership, admissions increased significantly to nearly full capacity, with waiting lists, and counseling services were increased to include quality college advising, as well as, preventative services to address mental health needs. Additionally, employee compensation and benefits were increased and a number of faculty holding Doctoral and Master's degrees were intentionally recruited and hired. Increased opportunities for faculty development continue to be a priority focus at SCS. During Dr. Cohen's tenure, over $3 million was raised from both US and Dominican donors. Under his administration, $750.000 was invested in infrastructure, security, and a renovation of the sports/arts complex. Additionally, a new ten-classroom solar-powered building was constructed featuring a state-of-the-art science laboratory.

Seth and Anne Cohen met as boarding school students at the Stony Brook School in New York. They graduated from Wheaton College and were married in 1988. Anne has a BA in English from Wheaton and an MSW in social work from the State University of New York at Stony Brook. She is the sole proprietor of Right at Home Homestay, LLC in Philadelphia, which serves international students and professors from the U. of Pennsylvania, Drexel and Temple Universities. Daughters Deborah and Eliyanah join their parents at JCS. Deborah (13) is a joyful seventh graders whose favorite subject in social studies. She loves soccer, theater, choir and worship band (guitar). Eliyanah (11) is a happy sixth grader whose favorite subject is math. She loves soccer, visual arts, theater, chess and robotics.Noah (27) earned a BA and Master's in Special Education at Liberty University. He teaches Middle School Special Education and coaches robotics at SCS. Josiah (26) graduated from Wheaton College with a BA in Music (Bassoon) and is working on his Juris Doctorate at the University of Colorado, with an emphasis on immigration law. He is married to Erin (25) whom he met at Wheaton College. Following her BA in Psychology from Wheaton, she earned her MSW from the University of Denver and works with severely mentally ill adults in their recovery. Sarah (23) graduated from Wheaton with a BA in Political Science and is working on her master's degree in Humanitarian and Disaster Leadership at Wheaton. She has been the communication and marketing manager, as well as, the model United Nations coach at SCS. Isaiah (21) is studying Sports Management in the School of Business at Cairn University. His passion is sports ministry. Hannah went home to Jesus in 2008 at the age of 16 after a five-year battle against Primary Pulmonary Hypertension. Anne's widowed mother lives with the Cohen family in their home in Jupiter.